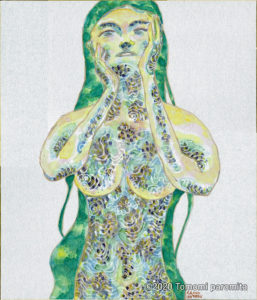 Drawing was my language from my childhood when I was terribly crippled in verbal communication. I felt so handicapped in language as a child, which I think has built in reaction my deep admiration to language itself —I get surprised how people take it so lightly and without respect. I found language to be enchanting, and saw certain powerful and, in a way, magical quality in it. Painting was like a natural habit for me till I went to University, when I left painting for a couple of years (and it took me more than that number of years to recover my ability to paint!).

When people wonder why I do both singing and painting, I think this is the answer. It comes from the same source, and both were only natural outcome of my relation to the world and humans. Then what about the body? The dance? —nothing happens without pursuing our own body. And dance happens as a natural consequence. To sing, and to experience the world that I paint, brought me to work on my body, naturally. Because we need this body to experience this world. 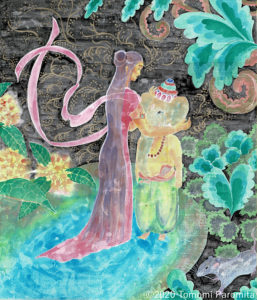 Being a minority was a part of my identity from my earliest days. Some may scold me for saying this, because I am from a middle class Japanese family of “Japanese” majority blood in Japan, and I have faced only few directly-racist incidents during my years in countries such as Australia and Singapore.

But still, it was real for me; wherever I was, I was always made to feel “I am not normal” “I am not to be understood”. My tribe was not in physical or racial commonality but in those whom I met through connections of heart.

Having lived in a few countries, my conclusion was just that anywhere it is ultimately the same… life and world is basically a hell. There are surely different levels of hell and maybe I have only seen lighter layers of it, but hell was hell. But somehow I understood it was not yet the time for me to end my life, and I always wondered for what I need to keep my life going. 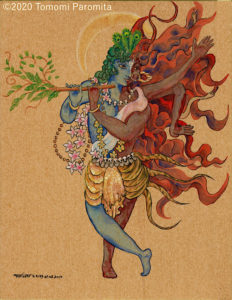 It must have been that kind of resignation that led me to Baul. I cannot yet say exactly why. It just happened, and I never planned; it was impossible to be planned. I was not even looking for a guru, I had no idea nor any concept, but somehow it happened, and it has become my life.

It is like, I was floating in the sea and I knew how to swim, but it was very hurting and exhausting. I wanted to melt into the sea and become just one of the waves or molecules, but I knew drowning does not help. Then I encountered a glowing whale with the eyes of constellation and started to follow.

Maybe after all it is a process of regaining my own light and rediscovering heaven in what I once thought was hell. But I do not want to claim it. Every subtle matter, when it is put into words, seems to appear something not that. 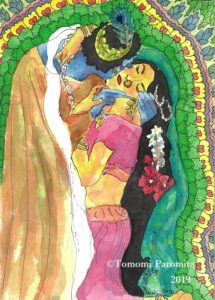 Love and compassion; even these words, I cannot claim. I am only learning to live it.

Now looking back, I used to believe as a child that whatever I felt, and the actions I made accordingly, were all for the benefit of others. Then I learned, as I grew up, that my feelings were often unusual and my actions could simply be blind arrogance. Hence my complications grew. Although I think this step as a process was necessary to nurture my humility, it has certainly affected my belief and intention to work for the good of others, which I now consider to have been kind of pure and close to the essence of my nature. Filtering all the senses of shame associated with it, I am now in the journey of living what is actually at the core of my being.

I would not go into this topic so much, but whatever depression I have experienced was actually caused by the illusion of ego. Acting and praying for others was the only way out. However, I cannot tell this to anybody who is in suffering right now, because it is the kind of conclusion that only makes sense when you arrive by yourself.

It has taken me some years before I could present myself as a practitioner as such; “present” might sound funny, but it is indeed a big statement to call myself a practitioner. I knew I must, if I am to be in a path seriously, and sometimes tried, but I was still afraid. Afraid of what? To declare myself as one- it is a huge responsibility, to the lineage, and to the whole world. 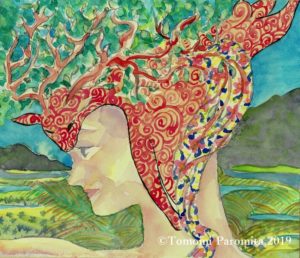 I must be clear that I do not call myself a Baul, but only someone trying to follow the Baul path. Sometimes people, especially in Japan, call me a Baul and I deny and explain when I can. But when only short words are allowed, explanations can only appear overly self-conscious. Then I sometimes let it be, but I myself is very clear that I am only someone who tries to follow the path.

Talking on how I came into Baul path, and about learning singing and dancing.
From 2019 Melbourne.

On language, in relation to learning Baul, and on ektara.
From 2019 Melbourne.