I was going to end the posts on Goze with the last post, but then I found some interesting descriptions in my paternal grandfather’s writing. He wrote an autobiography in 2007. Although it was just a handwritten and photocopied self-made book, it was written in such an official-report kind of way that nobody in the family could really read it. I think I am pretty much the only who is reading it properly so far. I returned to it recently out of curiosity, especially since I remembered he had written something about Goze. And it turned out to be quite an interesting account that I decided to introduce by translating the section here.

This is one of my oldest memories. I was four or five years old (1929-1930).
In the winter, five or six blind women came to our village holding Shamisen. They were called Goze.

We received them calling them Goze-san. They came in line holding hands with each other, with one person who can see a little bit leading the line. They were coming from the snowy region of Niigata. They would stay for the night playing Shamisen and singing folk songs. They lived by the money they received from the audiences. The ancestors of my family had come from snowy Kochiya in Niigata, and the Gozes came travelling from village to another after this kind of connection. Our house was also their regular stay, so we welcomed them and gave them food.

In those days, I was told that in Niigata, people are always living in the snow and because they always live in the shining white that many people become blind from that sight. That was a lie. Apparently they came out in the winter because there was no chance for work in Niigata in winter.

It is reported that one of the last Gozes, Haru Kobayashi who was alive till 2005 to the age of 105, was active for some time after the war ended in 1945, but eventually changed jobs. I heard that they still looked into the mirror when they dressed themselves, even though they could not see. They prayed to be born with sight in the next life.

And he has even some illustrations! (Blue letters are my translation notes) 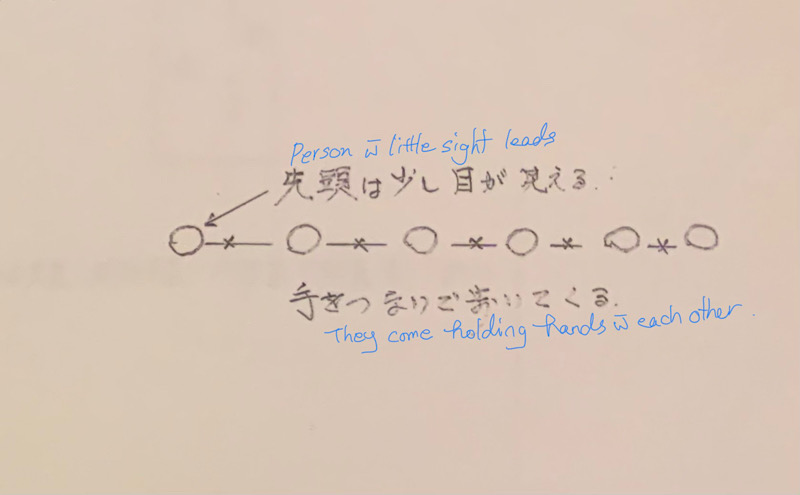 I always used to find it interesting that detailed village and area names come in the story telling by Bauls. But when I start to look into my own ancestry, I am made to realise how important it is; it is human nature and destiny to be moving and travelling over generations, and the precise place names do actually matter in our connection to the world.

A program on the life of the last Goze, Haru Kobayashi.